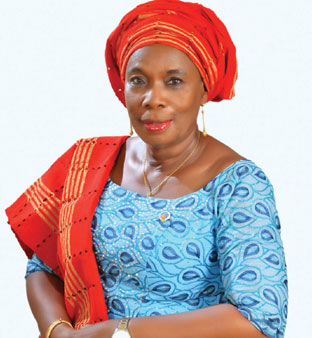 Come Sunday September 9, the Rotary Club of Gbagada will be swearing in its leader for the year 2018/2019. Retired Ophthalmologist, Rtrn Basirat Giwa, will be picking up the mantle as the club’s new president in the organisation’s decades long tradition of taking responsibility for the community. Having made the decision to join Rotary after very many years of self-imposed philanthropy, she tells WO why the platform, as well as her new role, will catalyse her current ideas.

A lot of people hear about the Rotary Club and don’t really know what it’s all about and what they do. Some even feel it’s a cult. Kindly shed some light.

Rotary is a worldwide organisation of business and professional leaders who are committed to the ideal of service to their various communities; founded in 1905 and represented by over 33,000 Clubs. Rotary Club of Gbagada is the foremost of the over 100 Clubs in District 9110 spread across Lagos and Ogun states.

Back in the day, women were not allowed to join the club and all of a sudden there are so many women. How did the shift happen?

In the beginning, Rotary was exclusively an all male affair until 1985 when the decision was taken by Rotary International Council of Legislation to start admitting women into the club.  Inner Wheel clubs are service organisations of wives of Rotarians; that’s the difference between a female Rotarian and an Inner Wheel member.

Personally speaking, how did your Rotary journey begin? What made you decide to join?

My journey to Rotary began about 28 years ago, 1990 precisely, when the Rotary Foundation sponsored me, an Ophthalmologist, and four other young professional ladies (a Pharmacist, an Economist, an Accountant  and an Educationist) to the  Philippines, South-East Asia, for a three-month program called Group Study Exchange, GSE. The program was designed to introduce Rotary and its ideals to non-Rotarians for them to appreciate its essence with the ultimate goal of joining the organisation.  Our team was led by a Rotarian and the trip took us to different parts of the host country, staying in the homes of Rotarians from diverse socio-economic backgrounds, learning the local cultures, and most importantly, observing the people as they served their communities selflessly as Rotarians. We were all fully convinced and converted to Rotary ideals on our return, after which we were referred to as Rotary Alumni.

Even though women were already being admitted into Rotary in 1990, it took some time in Nigeria before the idea became popular and clubs started to admit women as Rotarians. I personally took my time to determine when to join Rotary even as I stayed connected as an Alumnus.

Alumni are all former participants or beneficiaries of Rotary Foundation and Rotary International programs: they have an Association too. The Alumni Association of our District 9110 was chartered in January 2011 and I was made President.

By what means do you identify the need for intervention in a community and individuals?

My Club has in its 34 years of existence been involved in several humanitarian activities in communities across Lagos and Ogun states- in disease prevention and treatment we have conducted several medical outreaches, offering free medical and surgical services. In efforts to reduce maternal and infant mortality, we have donated incubators and other medical equipment to Gbagada General Hospital, Lagos Island Maternity Hospital, Federal Medical Centre, Ebute-Metta; we have also been involved in Polio immunization exercises across the states as Total Polio Eradication remains a cardinal goal for Rotary in its disease prevention efforts. We support education by renovating classrooms to create conducive atmosphere for learning, we even sink boreholes and build toilets in schools and communities to ensure healthy living.

We support local economies by providing microcredit finance to petty traders: our Micro Credit Finance Scheme in Ososa, Ogun State, will be 10 years old in January 2019: its success has earned us more partners and we are replicating same in Igbogbo in Ikorodu area. We promote peace in the world by awarding post-graduate scholarships to students to become Peace Fellows. All these areas of human interventions are the six areas of focus of Rotary Activity.

What are your plans for the coming year?

As President this year: I will continue with all the previously outlined traditional projects in all the areas of focus:  I shall renovate a Computer Lab within Maryland School Complex and supply more systems: I find this auspicious because the Lab caters for Primary School pupils from several schools around the District:

I plan two eye screening exercises (we already had one on July 11 at Isheri Oke, the next shall be in October for commercial vehicle drivers in and around Ojota Motor Park) to give free glasses to those with refractive errors and to document those who may need cataract surgeries. We shall provide water and renovate the toilets in another identified local primary school. In addition, the special one for the year is called the Star Project.

My Star Project is the Renovation of the Vocational Centre in Agege with the view to establish a School of Music.  Rotary does not intervene without the involvement of the stakeholders: most times, it’s the government. Rotary approaches government for partnership; we also partner with community leaders to ensure sustainability of the projects. Interventions are based on the needs of the communities.

There are adults who are out of school but can no longer fit effectively into formal education, but would benefit from developing their hidden talents in Music and Entertainment. We also found that a lot could be done to improve the learning environment for the existing students. They will need their own water source and their toilet facilities need to be upgraded.

All these will cost a lot of money: the official installation ceremony is a fundraising event whereby friends, family, associates, public spirited individuals and corporate organisations, are invited to support and make the projects a reality.

How do you measure the success of any intervention?

The success of interventions are measurable most times- improvement in health, from hospital records, general improvement in people’s wellbeing, improved literacy rate, etc.  All Rotary projects are systematically monitored and evaluated according to international best practices, such that years after a project must have been completed, Rotary International will still deploy monitoring officials to inspect and evaluate such projects.

How has the Rotary Club impacted the Nigerian society?

Rotary has undoubtedly impacted positively in Nigeria and is still going stronger. That is why we are continuously on membership drive because the task ahead becomes lighter with more people.

It’s public knowledge that the population explosion makes the task very daunting for government and for some time to come, partnering with service organisations like Rotary is the way to ease the burden of service to the needy.

The Publisher of the Vanguard, Chief Sam Amuka refers to you as an unrelenting philanthropist. How is this so?

Yes, helping people comes naturally to me. Walking around the neighborhood, I find it difficult to ignore whatever I notice is not quite right or whoever appears to need help, especially medical, since I’m a doctor. Somehow, I end up involving other members of the community to rally round and assist. Several examples abound and I’ve been lucky to have understanding and equally compassionate neighbors. That was how it was easy for me to embrace Rotary. Rotary is all about service above self.