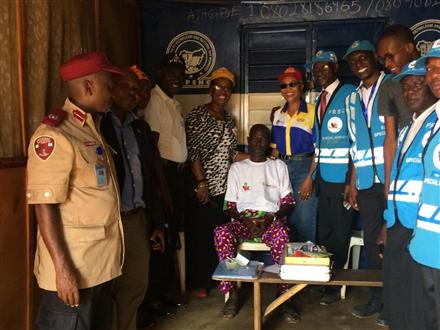 The project is an annual traditional exercise of the club. This time, it was carried out in partnership with Federal Road Safety Corps (FRSC) during their annual “Ember Months Campaign”. The objective is to emphasize good vision among drivers as an intrinsic element in road safety.

It is also an exercise in disease prevention and treatment as beneficiaries were treated with eye medications. Some got free eye glasses and others found to need cataract surgeries were appropriately documented. In addition, volunteer medical personnel spoke to them on general eye care and other medical concerns.

A total of 350 persons, all men and adults were screened. The FRSC personnel were impressed and confirmed that it was the most effective project and promised to collaborate more with Rotary in future.15 volunteers from our club and also Rotary Club of Ikorodu Golden participated in the exercise.